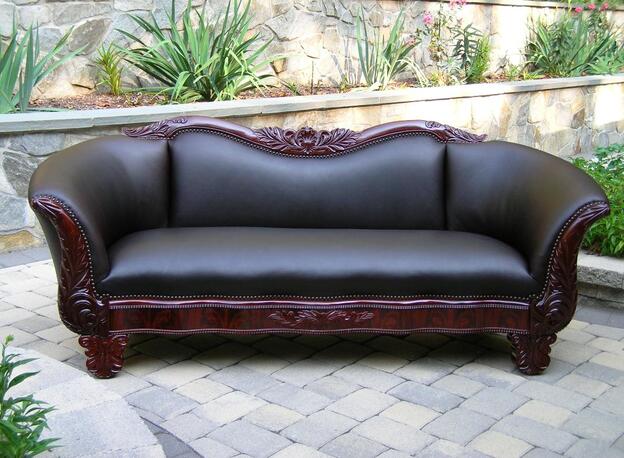 A one-of-a kind example of later American Empire styling. This full-sized Mahogany sofa, which we believe from interior labeling was first delivered to its new owners on March 5, 1840, has been painstakingly restored to near new condition, structurally enhanced to support 21st Century human size and weight, and fully reupholstered, seamlessly in top grain leather, to maintain the original lines. The sofa has a "solid and heavy" look to it's structure but without a straight line to be seen, and is ornately carved, signifying gravitas, wealth and power. The solid Mahogany forelegs, 'S' shaped arms, waving front skirt and the flowing top rail are all heavily carved in predominantly floral patterns, typical of the American Empire look inspired by post-Napolean French style.  The interior seating is completed with 100% new traditional upholstering components including: eight-way hand-tied, heavy gage steel coil springs covered in a layer of cotton, high density seating foam, and a final 1/2" layer of natural wool batting for an optimal seating experience.  Antiqued dome nails have a slight coppery patina that pairs well with the Walnut leather as well as the deep tones of the almost 200 year old Mahogany. This is a stunning period piece we hope you will find as comfortable as it is uniquely beautiful.